Just in time for the start of Series 6, we are giving you a sneak peek inside the Official Peaky Blinders Cookbook!

Delicious recipes for the avid Peaky fan and anyone who likes to get busy in the kitchen.

Immerse yourself in the world of the Peaky Blinders by cooking a dish that would make the Shelby’s proud.  Pair it with a drink from our official cocktail book and you can really start to live the life of a Blinder.

Find this recipe and more in the Official Peaky Blinders Cookbook.

Out 8 March. Pre-order on Amazon here. 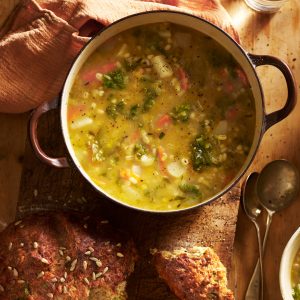 Melt the butter in a large saucepan or casserole over a low–medium heat.

Put the lid on the pan and cook for about 10 minutes, until softened but not browned.

Remove the lid and mix in the flour, then pour in the stock and Worcestershire sauce.

Bring the liquid to a simmer.

Add the pearl barley, bay leaf and thyme and cook for about 20 minutes, until the barley is tender to the bite.

Stir in the kale, season with salt and pepper to taste and simmer for another 5 minutes, until the kale has wilted.

If the soup feels quite thick, just add a little water to loosen.

Serve hot with some soda bread for tearing and dunking.

Best eaten whilst watching episode one of series 6!