An interview with hair and make-up artist, Loz Schiavo

Not only has Loz Schiavo styled all the hair and make-up on Peaky Blinders, she received a BAFTA nomination in 2015 for her work on the show. Here she takes us through the style of season 4.

Can you talk about the look of Tommy Shelby and how this has evolved for season four?
Tommy is more mature this year. When we first started back on season one he was a young man, whereas now he’s progressed, he’s been on a journey. He’s still got the classic Peaky haircut but we’ve gone a little bit shorter this season. 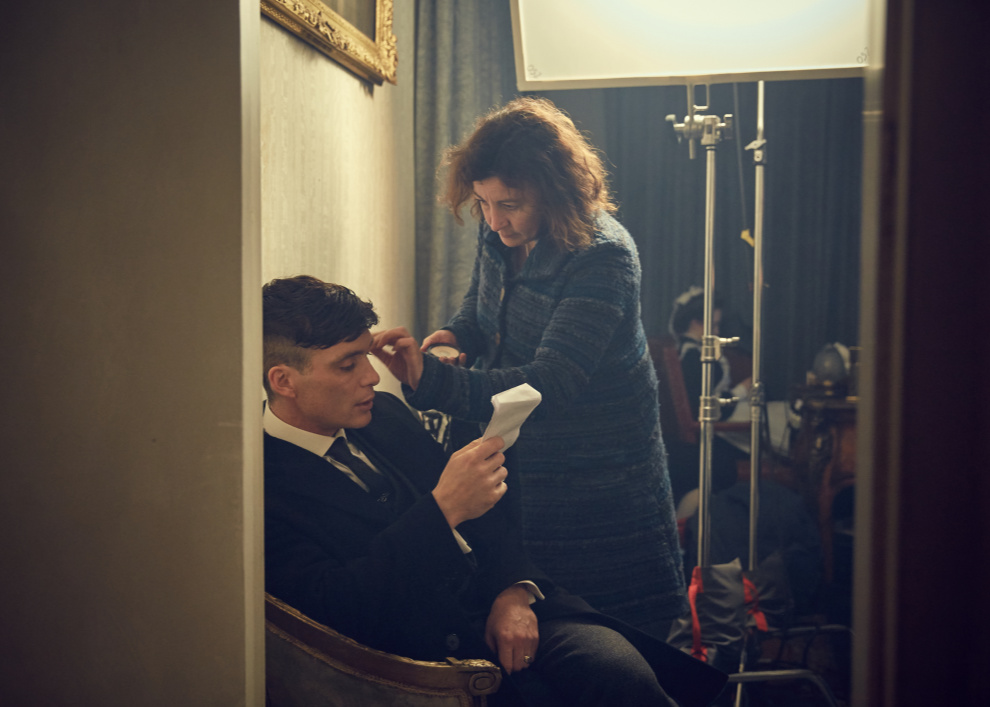 Polly’s look has evolved across the season. What was important to you and Helen McCrory in crafting the season four look?
It’s wonderful to work with Helen each year on Polly’s style and look. I suggest things and then Helen suggests more so it’s a complete collaboration. This year Polly goes through a real transformation. Helen herself loves changing things up. We open the season with Polly in prison so she’s got the same look as we saw at the close of season three. Then we see her later that same year where she has this transformation. We see her with her longer hair like in season one and her face is a lot more washed out to show the torment she has been through. When Tommy finds out what’s been going on we decided to give her a dramatic transformation in the hairstyle.

Between the end of season three and the start of season four, Ada Shelby has been living in America. Has this influenced her hair and makeup to reference the American style?
Now that the Peaky Blinders have got a lot more money, they look a lot more pristine and gorgeous. Ada’s hairstyle has some sexy finger waves and she has bright lips this year. She oozes sex appeal. When Ada returns to Watery Lane you can see the contrast between her and the working, drab men. She causes quite the stir. 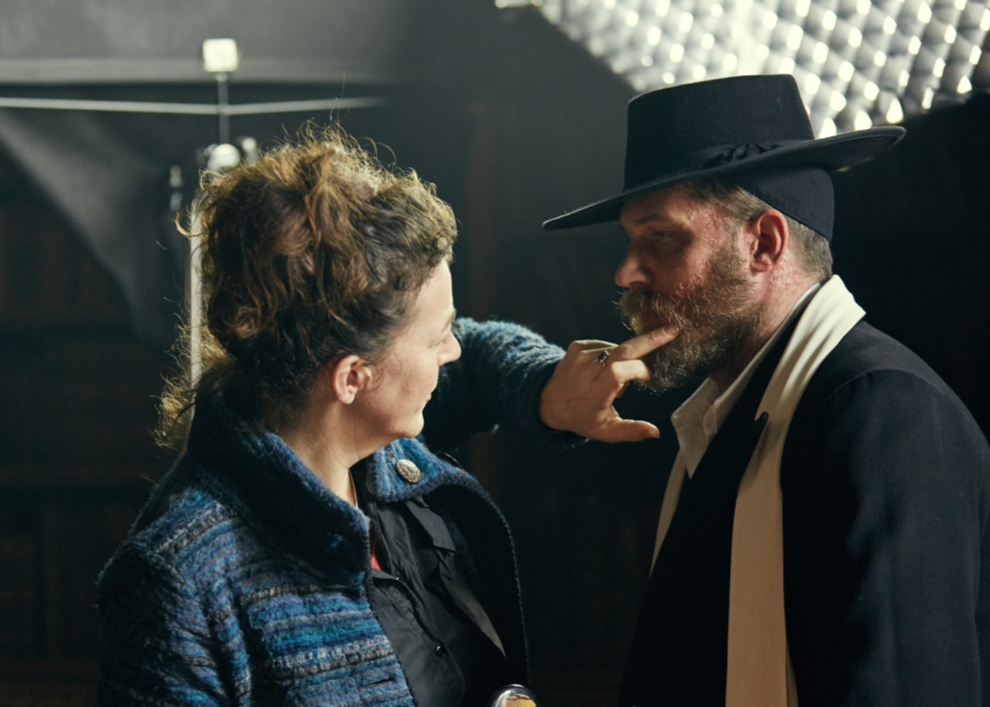 How did you create Luca Changretta’s look?
Adrien Brody and I emailed and spoke on the phone before shooting started. Adrien really wanted tattoos because the back-story was that Luca has come from prison. Tattoos are always the hardest thing because of copyright, so they had to really be altered from our research and made to look unique. The Shelbys are delivered a Black-Hand letter at the beginning of season four, which symbolises a warning. So we decided to also give Adrien a Black-Hand tattoo. Luca is also an Italian catholic, so we gave him crosses and symbolic tattoos also. We also put a couple of scars on him to show that his character has had a life and a past. It was a wonderful collaboration and I think everything came together to add the extra depth that Adrien and I wanted for the character of Luca. Adrien really does look the part. 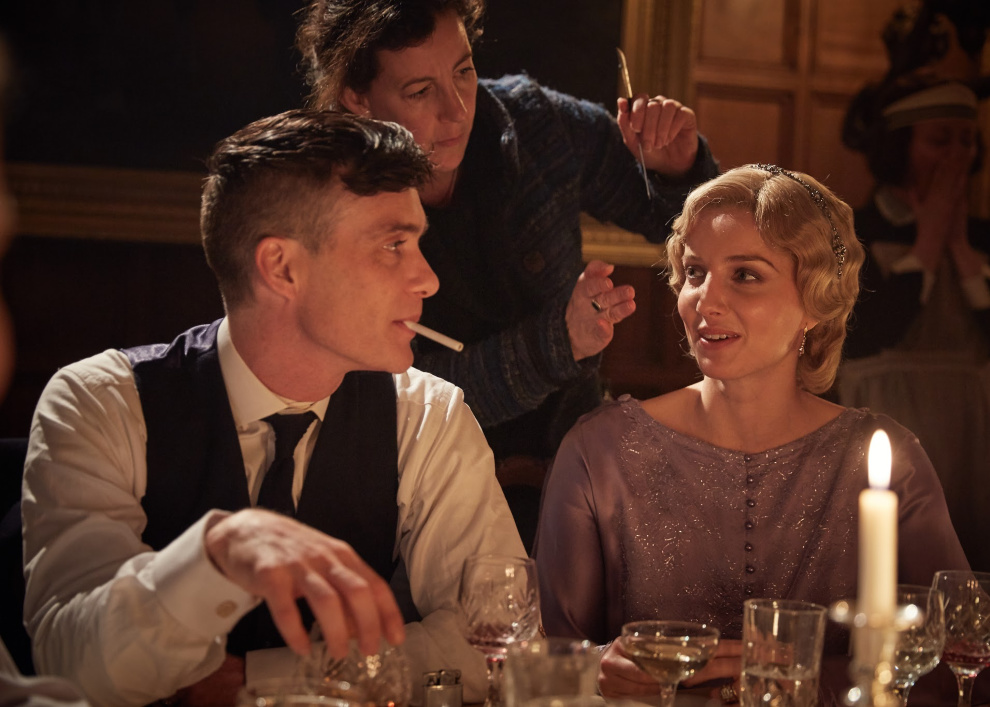 What are big filming days like for you and your team?
Our team works flat out for three hours in the morning on all the various cast. Plus if we have a day with around 200 extras we bring in daily make-up artists to manage the additional workload. Once the boys have their Peaky haircuts for the season, it’s just a matter of having to style them each day. There is also extra time factored in for any wounds we need to add to cast members for fight sequences for example.

Do the Peaky Blinders haircuts vary from Peaky to Peaky?
When I first did the Peaky cut, the director wanted something that was unusual and unique. I designed it so that when the Peaky cap is on, you only see a shaved head. But when the boys take their caps off, you see that each boy has their own individual haircut according to their personalities. 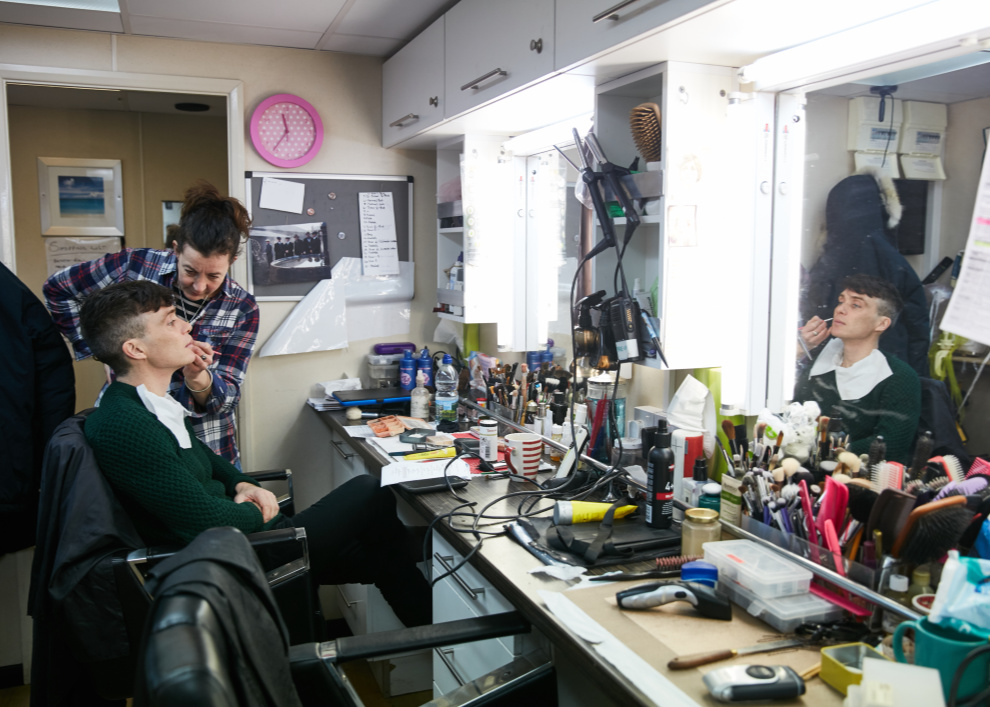 What scripted moments are you most excited about seeing when the show airs?
Everything’s exciting but when the Peaky women arrive at the large boxing hall that was a visually fantastic moment full of glamour. I also love the opening scenes where members of the family are in prison.